An update is also at the end of the video!

Jayson Litrio –  The Legend of Zelda: A Link to the Past “The Goddess Appears (Trinity)” http://ocremix.org/remix/OCR00454

Nostalvania – The Legend of Zelda: Link’s Awakening “Have Ship, Will Travel” http://ocremix.org/remix/OCR03399

Script (note: artwork is posted below the script):

Earlier this year, I launched a three-part video series analyzing Nintendo’s stock, as it was a good way to understand business. What’s happened since then? Well, in July, Pokemon Go launched to stratospheric success, causing Nintendo’s stock to reach our fair valuation. And since then, Mario’s been showing up in all sorts of places, like at the Olympics and at Apple events. And, most importantly, Nintendo’s next generation hardware, the NX, was revealed as the Nintendo Switch.

Given all these events, let’s update our view on Nintendo and figure out its business strategy going forward.

Hey, what’s up, welcome to Art and Finance. Now, anyone can understand Business, Economics, and Finance.

If you’re new to Art and Finance and my analysis of Nintendo, it might help to watch my previous three–part video series on Nintendo. And, if you don’t know anything at all about business and finance, it might also help to check out the “Quick Intro to Finance” section of the website. I’ve put links in the description. Sources for this video can be found in our website as well, the link of which is also in the description.

Now. Unless you’ve been living under a rock, you’ve probably heard about the Nintendo Switch, Nintendo’s latest gaming hardware, which had been in development under the codename “NX”.

And if you’re just now creeping out of your rock, here’s the Switch’s 20-million-times-viewed YouTube video, which shows how the console works:

The Switch is basically a tablet that plays cartridge games.

It’s portable, but can be connected to a TV.

It has a pair of controllers that can be played by one or two players on the go.

Nintendo has stated that it will reveal more about the Switch on January, but reports indicate that it also has touch functions.

So, this isn’t too far from our previous speculation of what the NX could be.

There’s been quite a bit of fanfare on the Switch’s debut on October 20. It was trending on social media, plus the YouTube video hit several million views within 24 hours of its release. During the following week, however, Nintendo had a much more muted release with its fiscal 2017 second quarter financial results. Let’s take a look:

For the period starting calendar July 2016 and ending August 2016, Nintendo booked an operating LOSS of about Y800 million, but also a net PROFIT of Y63 billion. This was due to 1) a Y12 billion income from Nintendo’s 32% stake in the Pokemon company, which profited wildly during the period from the success of Pokemon Go, and 2) Nintendo’s Y63 billion sale of most of its stake in… US baseball team the Seattle Mariners. Yes, you heard that right. Nintendo owned a baseball team.

Just the same, the fact that Nintendo booked an operating loss this past quarter is not a good sign for Nintendo’s legacy business. After all, if the losses keep mounting and eat into Nintendo’s cash hoard, the company could run into major financial problems. Keep in mind that the failure of the Wii U caused Nintendo to lose nearly half its cash holdings. The Switch, which is scheduled to launch on calendar March 2017, can’t come soon enough. The question is, will the Switch save Nintendo? 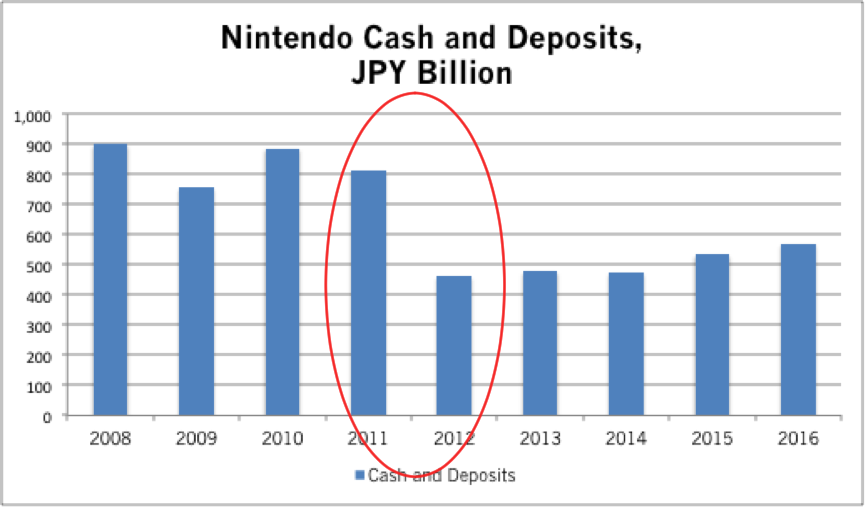 Nintendo has stated it will reveal more details on the Switch on January 12. However, we can glean some insight into what their strategy might be by watching the Switch launch video, so let’s take a look at it again.

Going over this video, you might notice several things. The first is the absence of any children in the video, a break from Nintendo’s traditional marketing strategy of targeting children and families. Instead, we have yuppies, teens, and professional gamers.

This actually makes sense, if you think about how current industry conditions shape Nintendo’s positioning. As we previously discussed, Nintendo is caught between Microsoft’s Xbox and Sony’s Playstation, which cater to hardcore gamers, and smartphones, which cater to casual gamers. Maybe one reason why the Wii U failed was because Nintendo was trying once more to go after casual gamers, including children and families.

This time around, however, Nintendo appears to be targeting specific niches. Clearly, the hardcore gaming crowd is one of those niches. But what about those teens and yuppies? Would they actually buy a Switch?

Maybe it’s no surprise that Nintendo has been on something of a charm offensive recently. Pokemon Go was released to stratospheric, mainstream success. Mario showed up at the end of the Rio Olympics. Miyamoto-san shared the stage with Apple’s Tim Cook to announce a Mario smartphone game. This sort of publicity has brought Nintendo back on many people’s radars, including those who grew up with Nintendo’s intellectual property. After all, it’s worth noting that 40% of adults who downloaded Pokemon Go were age 25 and older. And as a result, maybe it’s no surprise that the Nintendo Switch’s YouTube reveal video racked up over 11 million views in the span of about 24 hours.

Okay, so Nintendo is reaching out to hardcore gamers and using nostalgia bring back the lapsed fans. But again, will Nintendo’s target audience buy the Switch? Nintendo can’t rely just on their IP. Because if they’ll also be using their IP for smartphone games, there has to be something else, something unique about the Switch, to encourage people to buy the console. And that something might be local multiplayer. Local multiplayer refers to a group of people playing in one physical location, as opposed to several individuals playing the same game from different locations.

While other gaming platforms have moved away from local multiplayer, Nintendo has always embraced it. The Switch appears to be uniquely designed to make local multiplayer as convenient as possible. This setup would not be doable with smartphones, and, in my opinion, is the key differentiator and reason to buy the Switch. It also helps that Nintendo is bringing in third party, ie non-Nintendo, game developers on board.

So, let’s update our diagram of Nintendo’s potential strategy to reflect all this. Over the near term, Nintendo would use its smartphone games to win consumer mindshare, and get a subset of those consumers, lapsed fans and hardcore gamers, to buy the Switch. 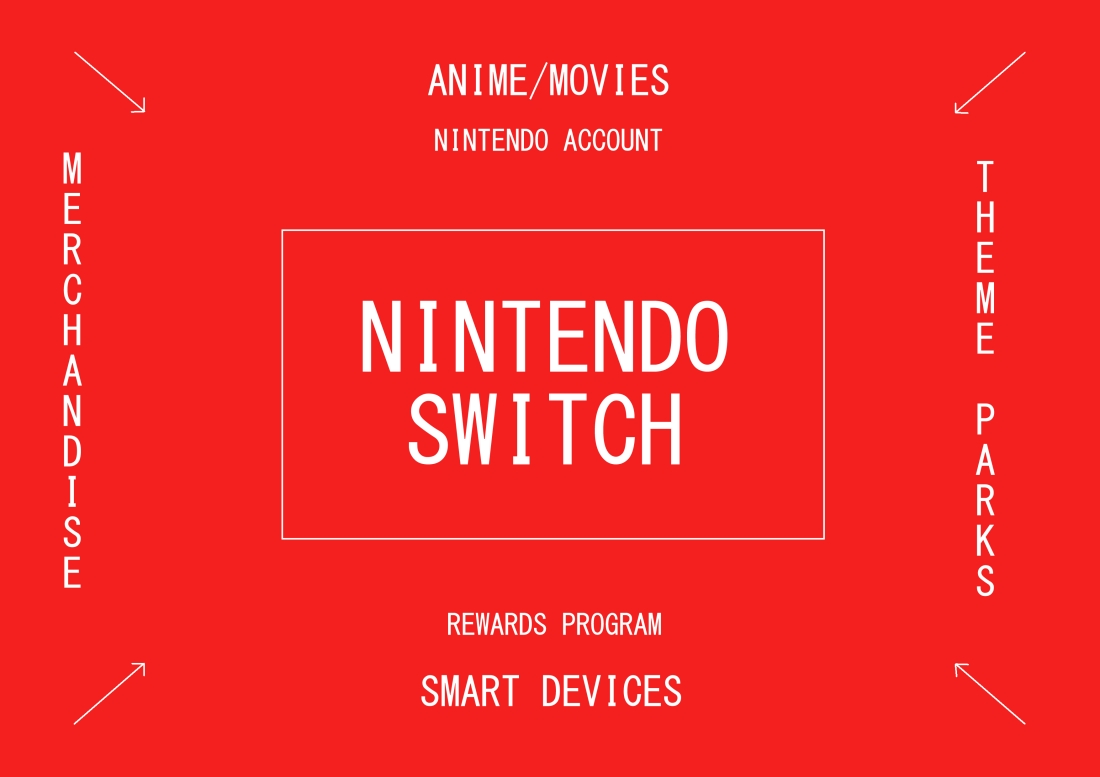 Over the longer-term, I think it’s unavoidable that Nintendo will have to transition into a media company, a la Disney, with console gaming being a component of the business, along with other revenue streams such as merchandising and theme parks. And based on what we’ve previously described, Nintendo seems to be at the start of this transition.

As such, my view is that the key for Nintendo is to survive as a traditional gaming console business, while it builds its media business over the longer term. It might be harder than the halcyon days of the original Wii, but Nintendo doesn’t need Wii-levels of success to get by. Nintendo just needs to keep its console business going for as long as it takes while management establishes its media business and continue to grow mindshare among consumers.

Nintendo plans to ship 2 million units of the Switch in its debut month in March, but is reportedly still considering price. According to analyst Serkan Toto, the key price for the Switch to attract consumers would be $299. But now the concern here is whether or not $299 would be a good price for Nintendo. After all, while Nintendo has stated that it will listen to consumers regarding pricing of the Switch, it also plans to sell the console at a profit at launch.

In such a situation, the question becomes whether or not Nintendo can balance sales and profitability. On the one hand, too low a price might drive unit sales but diminish profitability or even lead to losses, and on the other, too high a price may be profitable, but sales may be weak in terms of units sold, also hurting profitability.

Furthermore, would consumers really purchase the Switch at $299? The 3DS only really started selling after Nintendo cut its price from $249 to $170. Anyway, what do you think? At $299, would you buy a Nintendo Switch? We’ll have to wait and see what happens in the coming months.

As usual, I advise most people to stay away from buying individual stocks, but for those that are interested in what I think about where Nintendo’s trading right now, here’s an update.

In July of this year, Nintendo’s stock price reached our fair valuation of Y 24,900, which we determined earlier in February, as it surged on the massive success of Pokemon Go. This represents a capital gain of 58.2%, which, annualized, comes to 172.4%. Not bad ;). The market has probably priced in that Nintendo’s IP can do well on smartphones, and may even get people to buy its consoles. In fact, the company reported a boost in 3DS sales following the launch of Pokemon Go.

That being said, there is a major downside to the stock if the Switch fails to catch on. In the most recent fiscal quarter, Nintendo’s management downgraded its fiscal 2017 guidance to investors given the continued underperformance of Nintendo’s established business. And despite tempered expectations, management is still forecasting full-year sales and operating profit of Y470B and Y30B respectively, which is still a far cry from where we are at the halfway point. As of the first half of fiscal 2017, Nintendo has revenues of Y137B and an operating loss of Y6B. It appears to me that Nintendo is banking on a huge sales boost in March, the very last month of the very last fiscal quarter, as the Switch is released.

In valuing the stock, I use Nintendo’s updated guidance for fiscal 2017. However, since we’re already halfway through the year and we’re concerned about future cash flows, I roll over to fiscal 2018 and use those numbers for my valuation. For fiscal 2018 numbers, I use consensus revenue estimates and margins from fiscal 2016 – fairly prudent, in my view. Taking fiscal 2018 forecasted book value and applying our previous price-to-book-multiple of 2.58x, we get a fair value of Y25,540 – not too far from the current share price. As a result, I believe the stock is fairly valued at this point, and would only review my valuation if a new catalyst emerges.

And that’s it for our update on Nintendo’s strategy. By the way, some good news! I’m planning to make more YouTube videos, more frequently! Why is that, after I’d previously said I’d do fewer? I’ll give you guys an explanation next week. After that, here’s what the following video is on. Thank you all for your continued support! (Fin.)

End of First World Manila Podcast (but follow me on FB!)

When the Media Manipulates You… (First World Manila Podcast #30)

Can a Beauty Queen be a Feminist? (First World Manila Podcast #29)